The MK802 are made from a TR-90 synthetic titanium, which makes them durable, lightweight and comfortable against the ears. They certainly feel sturdy for lightweight headphones. 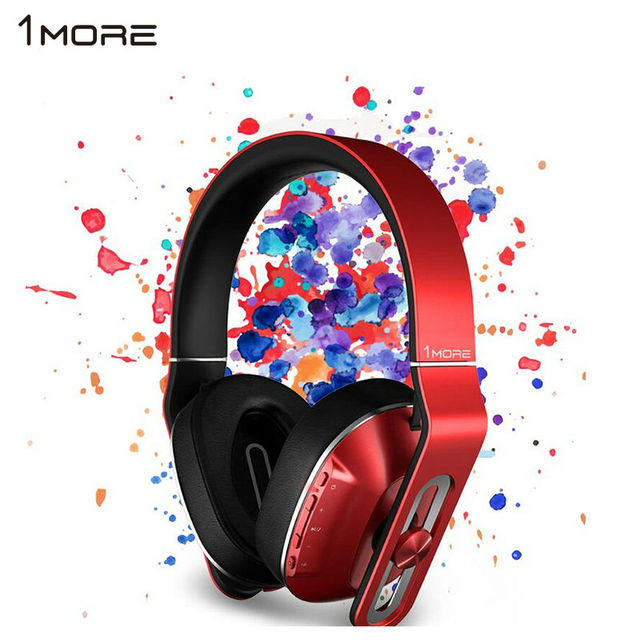 They sit rather snugly on the head, although the soft leather earcups and headband make sure they remain comfy. We find their snug fit to be a little irksome over long listening sessions, but this is something that’s prevalent for lots of pairs of over-ear headphones.

On the back of the MK802’s right earcup you’ll find the power button, which you need to hold down for a few seconds to turn them on or off. Underneath this are volume up and down buttons, between which is a play/pause/answer-call button. The volume buttons protrude more than the play/pause button, to help differentiate when you’re feeling around – a small touch, but one that makes complete sense.

Alongside the main trio of buttons there’s a 1More button, which can be configured to launch different apps on your phone using the companion app – we made ours open Apple Music, for example.

On the left earcup there’s also a bass switch that lets you choose between three different levels of bass: hardly any, a normal amount, or a boosted amount. The left earcup also hosts the charging port on the bottom.

Connecting the MK802 to your phone is incredibly easy: make sure they’re charged up, turn them on and find them in your phone or device’s Bluetooth settings, then tap to connect and you’re away.

Download the 1More assistant app – available for iOS and Android – which can be used to burn-in the headphones. It plays a constant white noise to essentially warm up the headphones and get the diaphragms moving more freely.

We had a listen to our headphones before and after the 12-hour recommended burn-in time, and we really did notice a difference. Music sounded flatter before we let them run in, whereas afterwards there was greater depth and it became much easier to place the various elements and instruments of different tracks within the sound scope.

There’s no active noise-cancellation on board, but the snug fit and plush leather earcups provide enough noise isolation to block out most external noise.

The majority of Bluetooth headphones take a dip in sound quality when you switch from wired to wireless mode. We didn’t notice much of a difference with the MK802, which is high praise indeed.

Dynamically these cans are very impressive. Some of our tunes had a quiet opening before exploding into action for the first verse. The MK802s handled everything with ease and delivered audio with real impact and excitement.

When you do get those loud moments in songs, the MK802s go really loud. They have a separate volume control to the one on your phone, so not only can you turn your phone or tablet up to full volume, but you can turn the headphones up even further – something that lacks from many Bluetooth headphones.

Better still, even after such amplification, there’s no distortion. The 1More MK802 remain composed, controlled and manage to keep the depth within tracks – instead of becoming one jumbled mess.

But for all of their good qualities, we did occasionally bump into a hint of harshness in the top-end, particularly when listening to dance tracks. It’s nothing a drop in volume can’t counter, but this sharp listen seems to be a trait of 1More – which might be a nod to the kind of music for which they are designed.

The last part of the listening puzzle is that bass switch. Because we’re bass junkies, we left it in the maximum position for the majority of our listening time, and were pleased that it didn’t overpower the rest of our songs. With it active, there’s a healthy amount of bass which added extra depth to our tunes without over-powering the mix. The middle bass switch position is also useful, but we rarely used the first position as we found it took away too much low-end.

The MK802 deliver more than enough detail for all kinds of music, while the adjustable bass switch allows you to choose the low-end level as you please. There’s no active noise-cancellation – the battery is for Bluetooth wireless listening only – but the snug fit and comfortable earcups provide high levels of noise isolation to block out sounds from the outside world.

For their £150 asking price we think the MK802 over-ears are great value for money – and definitely deserve a place on your potential shopping list if you’re in the market for a pair of over-ear Bluetooth headphones.

The alternative to consider…

The Plantronics BackBeat Pro 2 offer a greater Bluetooth range than the 1More MK802, plus they pause the music when you take them off your head. They’re incredibly comfortable and combine active noise-cancellation, too, which makes up a brilliant range of features to complement the excellent audio quality. However, they do demand an extra £100 over the MK802s, which is no small sum.

There are no reviews yet.